NRFF interviews Dimitri de Clercq, Director of You Go To My Head

YOU GO TO MY HEAD 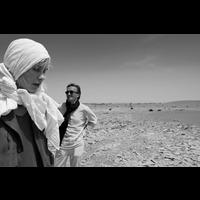 We are thrilled to have been selected for this year’s edition of the New Renaissance Film Festival in London and to be included with such wonderful films. And honored to have our film nominated in several categories by the festival. We’re looking forward to the film’s premiere screening in London and to the Q&A with the audience.

2. What is the basic premise of You Go To My Head?

Following a mysterious car accident in the desert, Dafne (Delfine Bafort) suffers from post-traumatic amnesia. Jake (Svetozar Cvetković), the first person she sees when she regains consciousness, tells her he’s her husband.

First and foremost, Delfine Bafort, the film’s lead actress. She is the soul and spirit behind You Go To My Head. She is the person who made me realize that the time had come for me to make a feature film of my own. I had been producing films, helping directors turn their dreams into realities. I’m Flemish like Delfine, but grew up primarily in the Middle East. I’ve often felt like a character out of a Wim Wenders film, someone without roots. When I first met Delfine in Morocco, while producing another film, I felt a longing for Belgium. She exhibited many of the characteristic traits of my native country and embodied so well the spirit of Jacques Brel’s song Le Plat Pays.

You Go To My Head also grew out of my life-long passion for the cinema and my convictions regarding the art and craft of filmmaking.

The sepia-hued, parched wilderness of the desert was also a key inspiration for the film.

The script for the film was written with Delfine Bafort in mind.

Svetozar Cvetković, who plays Jake, was approached with the shooting script by the film’s Serb co-producer (Zoran Tasic) only a few weeks prior to the start of principal photography. Svetozar was very taken by the story and immediately committed to playing the lead male role. He joined our film adventure with great enthusiasm and passion. You Go To My Head would not have been possible without him and his dedication to the film.

As a producer, I have always championed an independent cinema that remains true to the director’s personal vision, yet aims to reach and touch as wide an audience as possible. A lean form of filmmaking, with a compact crew passionately committed to making a film of quality and substance. So I launched You Go To My Head with those notions in mind.

My co-screenwriters and I approached the script in that same spirit. We wanted to tell a story that was suspenseful, tight and emotionally engaging within a solid narrative structure. Given our extremely limited resources, we wanted every euro to be on the screen. So we chose to tell a fairly unusual (yet extremely personal) love story that revolves around two principal characters and takes place in one primary interior location — a striking architect’s home I had access to in Marrakech. Yet, for our exteriors, we had the entire Moroccan landscape — sweeping deserts, dramatic seacoasts, vermillion mountains and lush forests.

5. What was the greatest challenge you faced in making You Go To My Head?

The late Stanley Kubrick evokes best the challenge of making a film in his D.W. Griffith Award acceptance speech to the Directors Guild of America: “… I’m in London making Eyes Wide Shut with Tom Cruise and Nicole Kidman and, just about this time, I’m probably in the car on the way to the studio. Which, as it happens, reminds me of a conversation I had with Steven Spielberg about what was the most difficult and challenging thing about directing a film. And I believe Steven summed it up about as profoundly as you can. He thought the most difficult and challenging thing about directing a film was getting out of the car. I’m sure you all know the feeling. But at the same time, anyone who has ever been privileged to direct a film also knows that, although it can be like trying to write War and Peace in a bumper car at an amusement park, when you finally get it right, there are not many joys in life that can equal the feeling…”.

To craft the film with the cast and crew during principal photography. The 6-week shoot was a genuine, intense and rewarding collaboration. The film was shot entirely on location in Morocco, with a key crew of only four and a cast of three professional actors.

To sculpt the picture with the film’s editor and post-production team in Münich, Germany.

And today, to (re)discover the film through the eyes of the viewers has been a most enriching and moving experience. Audiences have been very receptive to the film. Great and passionate Q&A’s followed the movie’s screenings at the 39th Cairo International Film Festival and the 23d Belgrade Auteur Film Festival. The festival tour has been an amazing adventure.

I would like for the film to share with the audience an “aesthetic” emotion. The sensation of having experienced a daydream. And, for John Keats’ words “Was it a vision, or a waking dream” to find a new resonance after viewing the film.

Cinema is most often seen as a window onto the world. I’ve always perceived it more as a mirror into the human soul.

More than a modern “twisted” love story, the film is an act of love. I conceived it as a film-inspired “Taj Mahal,” a hymn, an ode, to the splendor of its actress Delfine Bafort.

To continue promoting You Go To My Head on the festival circuit and to preparing the film’s upcoming North American release.

As for my future projects, I am currently completing work on a script for a feature film that I would like to make in the United States.