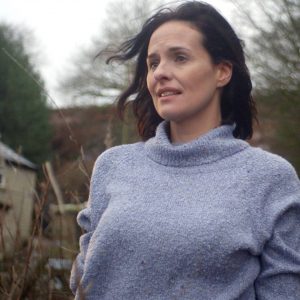 Nicholas Connor was born in Oldham, Manchester, England. He is a director and writer, known for ‘Cotton Wool’ (2017) and Northern Lights’ (2016). In 2017, aged 17, Nicholas won the ‘Into Film’ Ones to Watch Award, sponsored by Barbara Broccoli/EON Productions, presented by actor Charles Dance.

1.  Congratulations on being a part of the 2018 edition of the New Renaissance Film Festival. How does it feel to be part of this year’s programme?

It’s fantastic, thank you so much for screening the film. I’m looking forward to seeing all the great films on show this year. It’s so nice to see a category for Young Talent too, as it’s rare on the circuit. Alfie Barker’s ‘I Was 3’ which is showing is really beautiful and gritty and I’ve also seen ‘Hindsight’ Oisín-Tomás ó Raghallaigh’s film which is incredibly gripping – going off those shorts the quality in this category is so high this year. 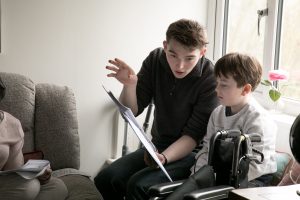 2. What is the basic premise of Cotton Wool?
Cotton Wool follows the story of a single mother who suffers a stroke leaving her teenage daughter and 7-year-old son to care for her.
3.  What inspired you to make this film?
My grandmother suffered a devastating stroke when my mother was only about 10 years old. Sadly she passed away shortly after, but I took the premise of what would have happened if she had survived and my mother would then have to care for her. This element combined with a feeling that society has generally become far less compassionate over time inspired me to make the film. 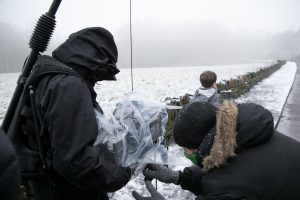 4.  How did you cast for the roles and prepare for the shoot?
In terms of casting, I knew from the treatment stage that I wanted Max Vento to play ‘Sam’, having seen him in ‘The A Word’ and was blown away by his portrayal of a young boy with autism at only 5 years-old — if we didn’t get Max we would have definitely gone for an older actor. As a massive fan of Ken Loach’s work, both Crissy Rock (Ladybird Ladybird, I’m a Celebrity) and Kate Rutter (I, Daniel Blake, Peterloo) came instinctually during casting. When casting ‘Rachel’ I knew I needed someone incredibly diverse and capable of pulling off a stroke survivor, so having seen Leanne Best (Star Wars, Cold Feet) in so many varied and powerful roles, myself and the team knew she was perfect, In preparing for the shoot, a lot of hard work in pre-production from Amy Pfeil (Assistant Producer) and Mark Quinn (Producer) made the shoot go as smoothly as possible for filming in rural Yorkshire in the middle of winter. 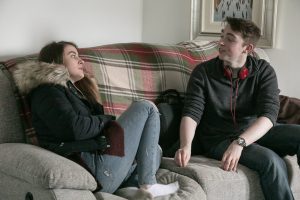 5.  What was the greatest challenge you faced in making Cotton Wool?
Our team knew the possibility of snow was high and with the main location being very remote down a one-way rocky path it was hard to plan for every circumstance – but as with everything on a film set everything bad that could happen did happen. Cars got stuck, vans were left stranded, actors got ill and as always there weren’t enough hours in the day generally for shooting or for natural light. A classic case of Murphy’s law lasted for the whole shoot but it wasn’t exactly a ‘Hearts of Darkness’ and with a brilliant crew/cast we got through it. 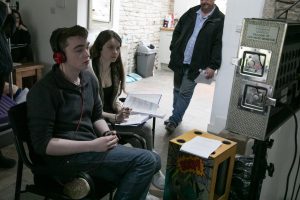 6.  What was the most rewarding aspect of making the film?
With everything I make the audience always is, and should be, behind every decision, so hearing kind words and seeing emotional reactions for me is incredibly rewarding. I couldn’t believe the amount of people that have come to me privately and said that they had gone through a very similar narrative in real life, whether that be suffering a stroke themselves or becoming a carer for someone who had survived one. Making something that has spoken to people in a way that hasn’t been able to before is incredibly rewarding. 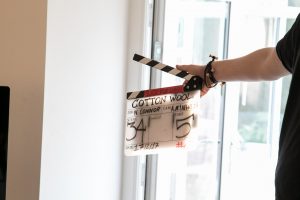 7.  Does the film have a central message (or emotion) you want to share with our audience?
For me as I said before, I really wanted to spark a discussion about modern day compassion, not to preach it but to ask questions about our society rather than give the audience answers. So hopefully people walk away simply thinking or talking about compassion and also the struggle of child carers. There are over 243,000 carers under the age of 19 in England & Wales and 22,000 of those under the age of 9, the statistics really shocked me and I wanted to make other people aware of the subject too. 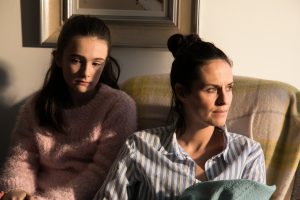 8.  What are your future plans for this film and are there any others in the pipeline you can talk about?
The film will continue on the festival circuit for another few months and I’m hoping to develop the film into a feature at some point in the future. I’m currently in the early stages of writing a different feature film, but we’ll see what happens. I’m planning to do another short film this year set in World War 2 but again it’s very early days.
In October 2018, Nick won a ‘UK Inspirational Children and Young People’s Award’ for ‘Arts and Culture’.