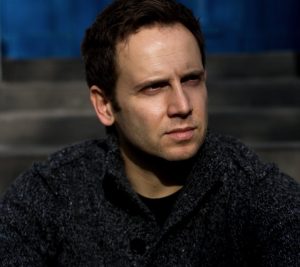 1. Congratulations on being a part of the 2018 edition of the New Renaissance Film Festival in London. How does it feel to screen The Overcoat at NRFF?

Thank you very much, it feels great to be part of NRFF. We’ve had a good festival run with the film, but it’s always exciting to be part of a prestigious London-based festival, so we can all attend together as most of the cast and crew are based in London.

2. What is the basic premise of The Overcoat?

It’s about an eccentric man who, in an effort to raise his lowly status at his place of work, spends every penny he has on a new overcoat. The ploy works and he finally feels accepted, but when it’s stolen from him after a moment of hubris, he spirals out of control and cannot return to his previous existence. It’s a tragicomedy that touches on many themes, such as identity, individuality and isolation. And perhaps some other nouns that don’t start with an ‘i’…It’s based on the short story by Nikolai Gogol, which I urge everyone to read because, in my opinion (and Dostoyevsky’s for that matter!), it’s a masterpiece.

I had read some Gogol when I was younger, but rediscovered him after seeing Geoffrey Rush’s performance in the stage adaptation of ‘Diary of a Madman’ at BAM in New York, and was blown away. I immediately reread all his short stories and plays, and when I read The Overcoat it pinged something inside me, and I instantaneously decided I would make a short film. There are some other equally wonderful short stories such as The Nose or The Two Ivans, but I could see The Overcoat in my head very clearly and I knew I could make it, as it deals with themes that I wrestle with constantly.

We were extremely lucky to have a sensational cast. I think Jason Watkins (The Crown, Watership Down) gives a beautiful performance – nuanced, heartfelt and very human. Thankfully he knew Gogol’s work (I think he may have done The Government Inspector on stage), liked the script, and we got on when we met, so he committed pretty early on. Once he was on board, Vicki Pepperdine, Tim Key, Alex Macqueen and Dominic Coleman all came on soon after that. Again, all of them knew Gogol’s work (Tim in fact has a degree in Russian literature) so that was a big help. Gogol’s tragicomic tone really chimes with some people, so I shamelessly exploited that fact. Also, normally it would be tricky for a short film to get such a great cast, but our producers Kate Turner and Mark Puddle were clever with the scheduling so that we could accommodate the actors’ existing commitments. The rest of the cast was made up of actors I knew or had worked with, so I knew exactly how good they were and it’s always nice to have some familiar faces on set.

I had a lot of time to prepare for the shoot because the fundraising took some time, as I didn’t want to do it on the cheap. I had already done a detailed treatment, moodboards and concept art (by the lovely Dan Morison) and I knew the locations very well (one of them my favourite pub, the Nell Gwynne) so I worked on the schedule with the AD to make sure we were using every minute well, as we only had five days to shoot, and I prepared my shot list. I know it’s quite old fashioned, but I like going into a shoot armed with a shot list and having some idea of my cuts, especially going into and out of a scene. Inevitably, things change and you need to be flexible, but I like having a plan that can change, rather than no plan at all. What was it Chaplin said, you have to be ‘supple, yet precise’, I think?

5. What was the greatest challenge you faced making The Overcoat?

The greatest challenge was raising the money. It took about 18 months in total and was a hard slog. We got rejected by the BFI and pretty much every normal funding avenue, but thankfully our producer Kate Turner won a JBA Award that gave us a start and from there we just did it bit by bit. We had spent everything on the production, so we had to do a Kickstarter campaign to fund post-production, which thankfully was successful and so we could finish the film to the standard that we wanted.

I think it must be the satisfaction of watching the film in a cinema with an audience who don’t know what to expect. People seem to like the film, which of course makes us all feel as if we’ve achieved something, and though we are standing on Gogol’s shoulders, I think we’ve created our unique own version of the story.

7. Does the film have a central message or emotion that you want to communicate to the audience?

I don’t really believe in ‘messages’ in storytelling, I think it’s better to ask questions rather than answer them, and one of the great things about Gogol’s work is that 10 people might give you 10 different answers as to what the same story is about. Which to me, is exactly how good art should be: a personal, subjective experience. I hope our film touches on several themes that might speak to a modern day audience without being too didactic.

The plan is to continue on the festival run for the time being (we’ve got DC Shorts and Dinard Film Festival coming up in September). The film will then be available to download via iTunes, Amazon Prime, etc as we’ve secured a distribution deal with Shorts International, so hopefully it will go on to find a larger audience around the world. I’m currently beavering away on what I hope will be my first feature, but I’m not ready to talk about it properly, as I’m not quite sure what it is yet myself…