On a rainy Sunday afternoon in London’s Soho, a group of talented filmmakers, actors, and screenwriters were gathered at the Courthouse Hotel, for the New Renaissance London 2018 awards party, hosted by actress Fleur Keith.

Directors Jan Hendrik Verstraten and Massimo Barbato created NRFF in 2016, to nurture talented artists and their vision. The remit includes young adults trying to break into the competitive world of film, and the festival’s Young Talent category recognises the filmmaking talent of artists aged 18-24.

Earlier in the festival, Nick and his colleague Keith Kehoe gave an excellent masterclass on how to make your first feature film, which for serious independent filmmakers is a primary goal.

In the film, Monroe (played by Milner), is a gifted dancer obsessed with being the best he can be. While saying goodbye to his family home, he recalls various fragmented memories in one long, tap dancing-filled dream sequence. Through the corridors of an increasingly temperamental, almost living-breathing house, we witness his downfall and see how his relationships were fractured almost beyond repair. The film asks the age-old question of ‘what went wrong?’ and answers it in a vibrant, experimental way. Whiplash meets Billy Elliot.

Bertie has an original artistic vision and has been making films since the age of 15. STOMPING GROUNDS is his ninth short film, and his work to date has inspired a huge fan base.

As part of his prize, Bertie will receive a consultation with First Flights to explore the potential of developing his first feature film.  Congratulations to Bertie from all of us here at NRFF! 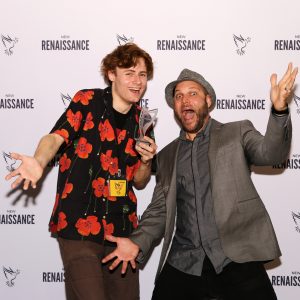