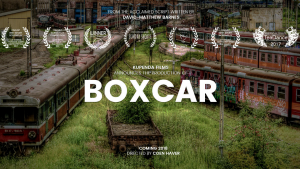 New Renaissance interviews director Coen Havers from the Netherlands and writer D-Matthew Barnes from the United States. Both won awards at the AMSTERDAM 2017 New Renaissance Film Festival – Coen for his film ‘My Piece of Happiness’, and D-M for his short screenplay ‘BOXCAR’. It brings us great pleasure to announce that after meeting at the festival, they have teamed up to make a film of ‘BOXCAR’. “On September 4th, they are launching a crowdfunding campaign on Cinecrowd. You can find it on www.cinecrowd.com/nl/boxcar.

1. Congratulations to you both on your recent success at the New Renaissance Film Festival in Amsterdam. How was your experience?

DM: “The New Renaissance Film Festival was a wonderful experience. I had the opportunity to see some incredible films, connect with many filmmakers, and come away with very valuable resources and information. I must say, the NRFF is one of the most professional festivals out there. It’s evident how much everyone at the NRFF love films and filmmakers. I am forever grateful to the NRFF for being the first festival to support ‘Boxcar.’ It’s there that this fantastic journey began.”

CH: “I couldn’t have said this better myself. It was so inspiring to be around so many young and talented people.” 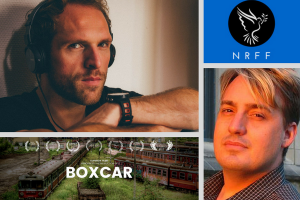 2. How did the collaboration between the two of you come about?

CH: “After the panel discussion at the festival, David-Matthew Barnes and I talked about the need to tell stories that are both thought-provoking and touching. When he told me about his script BOXCAR, that was in competition at NRFF, I was intrigued immediately. A few days after the festival I received an email from David-Matthew, containing the script. I read it and I knew: this is the film I’m going to make next. Luckily, David-Matthew shared my enthusiasm.”

3. What is the basic premise of ‘Boxcar’?

DM: “’Boxcar’ is about two young American men in high school. They live in a small town, where they’re not allowed to openly express the love they feel for one another. Instead of attending a school dance, they decide to spend the night together in a boxcar they find in an abandoned train yard. The story is really about two people who are living in a constant state of fear.”

4. David-Matthew, what was the inspiration for this story and why do you think it has been so well received?

DM: “’Boxcar’ is one of my few scripts that is slightly autobiographical. I was inspired to write from some of my own experiences growing up in Northern California, specifically Sacramento. However, I went for more of a small-town atmosphere in the screenplay. I wrote ‘Boxcar’ first as a poem, which really helped me understand the power of language in the piece and how the two characters expressed their emotions to each other. Before ‘Boxcar’ was a screenplay, it was a short stage play, which was produced in many cities in the U.S. A director convinced me that there was cinematic potential in the script and I should adapt it for the screen. I’m very happy I took his advice. The success of the script is a surprise to me. I honestly never expected the reaction that it’s received. This project has earned more accolades in one year than in all of the 30 years I’ve been writing. I had no idea the journey with this project would be so rewarding.” 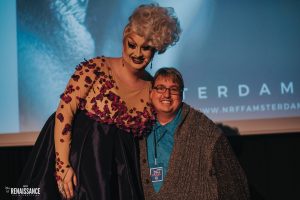 5. Following your recent success with the film short ‘My Piece of Happiness’ why did you decide to direct another short film, and in particular, ‘Boxcar’?

CH: “The success of My Piece of Happiness, 11 screenings over 4 continents, was pretty unexpected. I mean, I’d never thought that this film would take me to Thessaloniki and Shanghai. Especially since we created this film in 48 hours. For my next film I wanted to work with more time on my hands, to see how it would improve my work.

BOXCAR is the perfect script for me. Just like my former films it is a carefully constructed magical-realistic story. It has great dialogue with lots of emotional subtext. And the universal message teaches us that no matter where you’re from or what age you are, you can always overcome your greatest struggles with love.”

6. You are based in the Netherlands and David-Matthew is based in the US. How do you plan to make this film together?

CH: “It all starts with mutual trust. Trust in each other’s talents and capabilities. I know David-Matthew will back me up anywhere needed, he knows I will treat his story with love and care. We send each other long emails, we have extensive chats and I even send him voice messages haha. Because of our busy schedules and the time difference, it is almost impossible to have direct contact. But that is fine. It is also part of the excitement for this project, to see how this long-distance relationship will work out.” 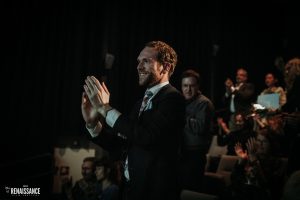 7. How do you intend to finance the project?

8. What inspired you to become a screenwriter?

DM: “I fell in love with films at a very early age, specifically Giuseppe Tornatore’s masterpiece Cinema Paradiso. I’ve always been fascinated with visual storytelling, how effective it can be and it’s many possibilities. However, I came to screenwriting later in life. Until my first film, I wrote mostly novels and stage plays. When I started writing screenplays, I quickly realized it was my favorite form to write in.”

9. David-Matthew, Could you describe your writing process?

DM: “I write every day. Because I write in different genres and forms, I’ve had to discipline myself to get up very early each morning to get the writing done before my day really starts. Otherwise, the writing won’t get done. In terms of process, I do a lot of free writing to get something down on paper. I write a thousand words a day, in order to keep up with deadlines. I have a home office that I work in.”

10. Coen, what inspired you to direct films?

Ch: “At my high school, we had a library with a small tv-room. Whenever I had an hour off, I would go there to watch a movie. One day, the  librarian came to me to tell me he just got a new film. It was a Mexican film, called Amores Perros, directed by Alejandro González Iñárritu. I decided to give it a chance. I have never felt more shocked and awed by a movie than by this one. I must have watched that opening scene at least 50 times, for me it is still one of the most captivating scenes in film history. After seeing this film, his debut for god’s sake, I knew I wanted to make something like that. Something that would take the viewer to another world, make him feel things he never felt before.”

11. Is it difficult to get a film made in the Netherlands? Are the challenges the same as in, for example, the US?

CH: “Since I’m not really familiar with ways of financing a film in US, it is hard for me to make a comparison. In Holland, it is pretty hard to get your film financed when you don’t have the support of the Netherlands Film Fund. There aren’t many commercial parties investing in films, because of the low Return On Investment. Still, I believe there are many reasons why they should invest. Call me stubborn, but I really believe you won’t achieve anything when you don’t know how to sell it.

12. How can people connect with you online and through social media?

CH: “I’m on Facebook as well and on LinkedIn. And you can find more information on my company and its productions at www.kupendafilms.com.”

Enter your script or film into NRFF Amsterdam 2018 today!