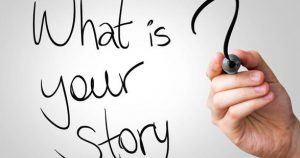 Based on Charles’ super Masterclass at NRFF London 2017

Every successful screenwriter I know is also expert at pitching. The thing that excites me is storytelling – whether I’m writing screenplays, novels or indeed books on writing. And pitching is storytelling in its purest form.

Whether a writer pitching a project to a producer or indeed a cameraman pitching a lighting idea to a director, everyone is telling stories all the time.

So, the first rule is that a pitch should be informal and conversational. You don’t perform it, so much as share it – as you would to someone you’ve met in the street or at a cocktail party.

A good film or TV pitch – sometimes known as a log-line – is essentially a one or two sentence story which has something magical that makes your listener’s eyes light up – this moment of ignition is what I call “the spark”.

There’s a certain magic you need to create that spark. You don’t have to be clever, you have to be disciplined and committed to not accepting second-best.

Nowadays I never start writing a script or a novel unless I have a logline with that spark – after all the first person I have to sell the idea to is myself. As I write, the pitch helps keep the draft focused. And at the end, the pitch is central to selling it to producers or publishers – whether in spoken or written form.

You need three ingredients to make a good story work:

Ingredient one is the genre. Will it make people laugh, or cry, or scream in horror? Or what? The genre is first and foremost about the emotion you want to create in the viewer.

Imagine the audience watching your work on screen. What do they feel?

In a screen story, you need an “outer” story because we have to film it – in other words, it’s not just inside their head. (A novel can be more internal, though most still need an outer story to form the story’s spine).

By contrast, the third ingredient is the Inner Story. What is the inner flaw that’s stopping the protagonist from progressing? On its own, the outer story can be rather thin and mechanical. This inner struggle gives it depth.

Hamlet has to conquer his fear of taking action (he fails to do this in time, which gives us a tragic ending).

Joy has to learn to stand up for herself. If, she does that she’ll earn her happy ending. In some stories, you find a mix, part growth, part failure, giving a bittersweet end.

To create your pitch, put them together: GENRE plus OUTER STORY plus FLAW.

Hamlet is a revenge tragedy about a young prince who must avenge his father’s murder but must confront his own fears before he can confront the murderer.

Where’s the brilliant writing? The subtle interrogation of philosophy? The other characters? The subplots?

They don’t belong here. Don’t confuse the log line with the script.

That simple sentence can take hard work to write. You need to focus hard on the absolute essentials, and cut away everything else – your 90+ page idea boiled down into a single line. But if you get it right, it will form the foundation of everything you do next – whether that’s drafting the outline, writing the script – or indeed selling it.

Charles Harris is an award-winning writer-director and the best-selling author of Teach Yourself: Creative Screenwriting Course and Jaws in Space: Powerful Pitching for Film and TV Screenwriters. His debut novel – The Breaking of Liam Glass – is out now, published by Marble City.

ENTER YOUR FILM OR SCRIPT INTO NRFF LONDON 2018 TODAY!

ENTER YOUR FILM OR SCRIPT INTO NRFF AMSTERDAM  2018 TODAY!