NRFF Interviews the Creative Team from The Burying Party 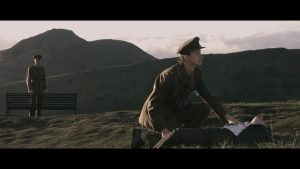 WEBSITE Wilfred Owen (Matthew Staite) returns to the Somme against the advice of his mentor Siegfried Sassoon (Sid Phoenix), determined to follow his subject ‘The Pity of War’ to the very end…

This film documents the extraordinary life of Wilfred Owen, the greatest war poet. The story is about outsiders, protesters, and those who use their talents in order to defy their times. It also tackles the issue of sexuality in a time of oppression, about young love, and about the dread of losing your soul mate due to matters beyond your control. Q&A with writer/director Richard Weston, and actors Sid Phoenix and Benjamin Longthorne after the screening.

While training as an actor at East 15 Acing School, Weston learned from directors such as Mike Alfreds and Tim Sandifer. In collaboration with Pelagie-May Green, his docudrama study of body language, Sanctimonia, was exhibited at Histories of Thought in Ghent, 2013.