Mark Smith is a filmmaker from Portland, Oregon, USA. He has produced the films North, Denmark and A House, A Home. As a cinematographer, Mark spent many years filming winter expeditions in North America and South America. He is the co-author of two photography books, Osterlandet and The Powder Road. Two Balloons is Mark’s first animated film, which won the Best of Fest,  Best Animation and Best Music Score Awards at NRFF Amsterdam 2018. Interview by Massimo Barbato, Creative Director, NRFF

1. Congratulations on being part of the second edition of the New Renaissance Film Festival, Amsterdam? How does it feel to have TWO BALLOONS screened here?

Every time I visit Amsterdam I always feel surrounded by art and a kind of liberal ideal. It’s as if both emanate from the surface of the canals. There is something magical about the city. The New Renaissance programming looks amazing and I’m really looking forward to screening here.

2. Can you outline the basic premise of the story?

The theme of Two Balloons is about people connecting and sticking together when life gets tough, when we’re faced with the unexpected and difficult.

3. What was your main inspiration for the animation?

A song and an ocean created the idea for the story. I was on a sailboat trying to get to an island called Grenada. On one of the passages, I saw a funnel cloud for the first time. It was daunting and mesmerizing. As I watched its 200 metre high, conical shape, skip across the waves I was listening to a song in 3/4 time, the time signature of a waltz, and that’s when the idea for Two Balloons happened.

For me, film projects always seem to start with music. I’m drawn to the way a song can transport us to a place of reverie and intuition. I feel like production design can take us there also. With Two Balloons, I wanted the score and production design to help shape the narrative, to take a viewer to a daydream-like place where instinct supplants intellect.

5. How did you finance TWO BALLOONS?

It was a self-funded effort but the kindness of strangers helped us reach the last frame of production.

Portland, Oregon is dotted with stop-motion on studios. They all lead back to Will Vinton who brought stop-motion to Portland in the late 1970’s. We received a lot of support from Portland’s stop-motion community. 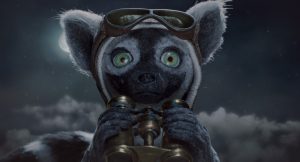 6. What was the most challenging aspect of making it?

Originally, Two Balloons was supposed to be a live-action short. When the aircraft hangar we needed for the airships became unavailable we suddenly had a scale problem. I turned toward stop motion as a solution. In the process, our human actors transitioned to lemurs.

7. Is there a message you would like audiences to take away from watching it?

I hope an audience can walk away with a new appreciation for stop motion. I hope they are drawn to the analog nature of the medium.

8. How have audiences responded so far?

It’s been positive. We’ve had some kind words sent our way.

9. Have you always wanted to be an animator? What advice would you give someone starting out?

I’m not an animator. I worked with talented animators and that was a gift on this project because it helped pull performances from our characters.

The most rewarding challenge was communicating my imagination into the fingertips of our animators.  We rehearsed and filmed all of our shots, acted them out, and we talked endlessly about movement and how subtle actions could support the narrative. In addition to storyboards and animatics, we studied a lot of film- nature films specific to birds and lemurs and favorite scenes from the silent era and contemporary movies too.

I’ve never wanted to be an animator but I do like the solitude of the lifestyle – The way the stages hush everything extraneous. The process of animation channels you into the present.

For anyone starting out in any aspect of film, I think passion makes perfect. If you love what you are doing, over time the work will get better. I feel like that is the only goal we are all trying to reach, to do good work.

10. Where can people follow your work or get in touch?

The WINNER of NRFF London’s FILM OF THE WEEK is guaranteed selection for the 2018 festival. Congratulations to TWO BALLOONS.