A dark comedy short about depression, friendship, and chinchillas. 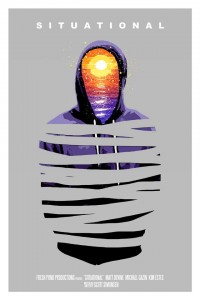 After being prescribed his third antidepressant, Charlie returns home only to have his Craigslist roommate Miles toilet flush his pills and kidnap him to see a sunrise over the ocean. Tension mounts as the fast talking road trip drives us to the bottom of Charlie’s pain and to the impending sunrise on the coast, where life could begin or end, literally… And then there are chinchillas. 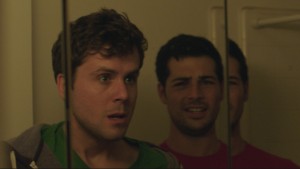 Winner of the prestigious Academy of Motion Pictures Nicholl Fellowship, Scott Simonsen is an active member of the WGA (Writer’s Guild of America) and has sold feature lengths pitches and scripts to top producers in Hollywood.

“Situational” marks his debut as a director (as well as producer and editor… and location scout and and wardrobe and crafts services…) The experience was a beginning to end crash course in filmmaking and has created an insatiable desire to create more.

Scott says: “While depression is usually seen from a pitied distance, my goal was to take the audience on an in-your-face road trip, where you would become claustrophobically locked in with the pain and humor of the characters. I humbly hope I succeeded in some respects and perhaps even created a piece that speaks to those battling depression, offering them comfort that they are not alone or forgotten.”

A native New Yorker, now living in Redondo Beach California, Scott tends to work in stories that strip emotional relationships to their cores, while also finding the humor and love within them.