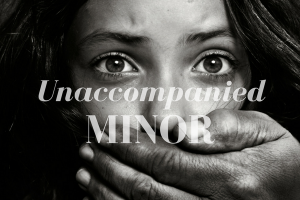 Biog: Following a motorcycle accident that left her permanently disabled, Kitania Kavey was unable to find her purpose in life, until she discovered a screenwriting class for the disabled.  At last, with the help of script format and structure, she could create worlds and stories from her point of view.  Her very first homework assignment won the Columbine Award from the Moondance International Film Festival, and she’s been on a roll ever since.

“Unaccompanied Minor is a tense and  fast-paced thriller based on real-life events.” NRFF Jury

Synopsis: An airport Passenger Assistant accidentally uncovers a pedophilia ring operating through a busy European airport and goes on the run with a young girl in order to save her from traffickers.  When his attempts to get help for the victim from the police and other authorities fail, he struggles to smuggle the girl to safety outside the country before they are both captured by either the criminal ring or the police.  “Unaccompanied Minor” was inspired by the real-life experiences of Rob Waterlander and his work to help the victims of child trafficking.

1. Congratulations on winning BEST FEATURE SCREENPLAY at NRFF Amsterdam 2017. How was your festival experience? How does it feel to receive this award?

Thank you!  It was amazing.  One of the highlights was getting to meet David-Matthew Barnes, the winner of the NRFF short screenplay competition.  With Twitter, Facebook and Instagram, it was easy to make connections and do some networking even before the festival began.  Naturally, winning an award is a terrific feeling.  It gives one hope that no matter what obstacles one faces – in my case, dealing with brain injury – it is possible to exceed expectations and even excel. 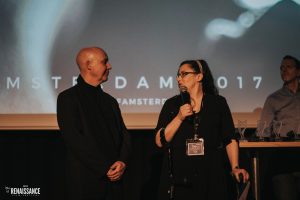 2. Describe the central characters in “UNACCOMPANIED MINOR” and their journey?

Rob, the protagonist, is quite the ordinary guy.  He goes to work, lives alone, and is not the kind of person who would stand out in a crowd.  Following a bad divorce, he’s internalized his anger and guilt, connecting with others only superficially until he meets Rayna, one of the victims of a child trafficking ring.  Her strong personality has allowed her to survive unimaginable circumstances, and she uses that skill to her advantage, manipulating Rob to come to her rescue.  Rob, who always followed the laws and rules, now finds himself committing criminal acts to save the girl he’s just met.  But as he leaves his own past behind, he finds a new calling and real purpose in life.

3. What was your inspiration for writing a story about child trafficking?

Rob and I were friends for a few years before he told me about his experiences at the airport.  He knew I was a writer, and was frustrated that he could not get the right ears to hear his story.  There are a lot of myths and misconceptions about child trafficking, and many political hurdles to overcome before the problem can be more effectively addressed.  I’m not a journalist or an activist, nor have I had experience with documentaries.  What I could do, was help my friend by writing a dramatic action screenplay.

4. What would be your dream come true for “UNACCOMPANIED MINOR” and why?

I would love to see the story on the big screen.  With a produced film, Rob will be able to continue his work, educating and informing those in the airline industry on how to spot potential victims, and changing the rules regarding the transport of unaccompanied minors.  Ideally, I would be able to work with representation (such as a literary agent) or a producer who feels the same passion about the story as it is now, a dramatic action about a man who dared to stand up and do something when no one else would.  It’s a way to perhaps reach a broader audience, than by re-writing it as a documentary or having the story be about the victim. 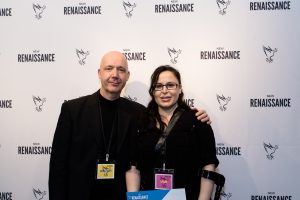 5. Describe your writing process and how you researched your story.

I like to do my research first, then craft an outline before writing.  Normally my research involves a lot of reading and internet searches, but with Unaccompanied Minor, I needed to do a lot more.  I got to shadow Rob at the airport, including going to all the employee areas where normally outsiders are not allowed.  We took a tour through the red light district in Amsterdam and did research on the illegal sex clubs operating outside that area.  I could speak with people who are actively saving trafficked children, often with the police or other authorities looking the other way.  The information that these civilians hold, particularly about the ‘johns,’ and the networks and criminals that they sometimes have to negotiate with to rescue a child, is very scary.  Rob lives that.  Luckily for me, I was only involved with the research part for about two years.  Now I’m working on a reverse adaptation of Unaccompanied Minor, safely from my home.

6. Have you always been a writer? How did you become a screenwriter?

I was a reader first, good enough so that I took over for the teacher in kindergarten, reading stories to the class.  Shortly after beginning third grade (around age 8 or 9) I learned I could avoid regular schoolwork by writing short stories or poetry for my teacher.  I dropped out of school, though, as a teenager and spent years on the streets, until the motorcycle accident when I was twenty.  During that time I did not write anything new.  A collection of written work I had with me was stolen, and I vowed never to write again.  Following the accident, I focused most of my attention on simply learning to live with a host of new handicaps.  It wasn’t until I ended up in the screenwriting class in my mid-thirties that I began writing again.

7. What do you think makes a good screenplay?

As a reader and first-round judge for two US-based screenwriting competitions, I can tell you what resonates with me.  First and foremost – good format.  Show, don’t tell.  Personally, I like a story when the stakes are higher, when characters are forced into doing things and making decisions that are not normal for them.  I also prefer stories where there’s a ticking clock, and the characters must transform within a short amount of time.  The best screenwriters, in my opinion, use every object, every description to tell us something about the characters or the situation.  That’s exciting to me.

8. What can people do to help raise awareness about the crime of child trafficking?

Help us get this story to the screen, buy the book version when it’s published, or ask Rob to come speak to your group.  There are already charities and organizations in place that help make a difference and educate the public or teach those who work in law enforcement, airline personnel and so forth to spot the signs of a potential victim.  All of them could use support.  Or write your own stories featuring children who are victims of physical, mental and/or sexual abuse.  There are so many true stories from nameless, faceless kids, maybe you could help give them a voice.

9. Are you hopeful of change in the future?

Indeed I am.  Life is change.  Every screenplay that we write is about change.  Who the character is at the beginning, can be quite different from who he is at the end.  I think it’s human nature.  Perhaps we’ve evolved the most because we seek out change; a better climate, better land, more work, more freedom, different possibilities.  Not all changes are good, but sometimes out of the worst circumstances, the greatest change can arise.

10. Where can people find you on the internet?

For more information on the topic of child traffiking and how you can help to raise awareness visit: https://ourrescue.org/