The Ministry of Guilt is coming. Confess before it is too late.

Produced in association with K17 Films

Congratulations to ‘Ministry of Guilt’ for being selected as our Film of the Week!

This darkly humorous short thriller is set against the nightmarish scenario of 24/7 surveillance, privacy invasion and those dark thoughts that keep us awake at night. Sam Smith is woken by the late-night delivery of threatening notes through his letterbox. Each note more disturbing than the last. What did you do, Sam? The clock is ticking.

Starring Alex Beckett (W1A, Twenty Twelve, Youth) as Sam, the film explores an increasingly paranoid fear; are we really being watched? Or is it all in our mind? 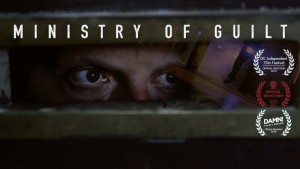