Open Mike explores the life of Michael, an adult with autism who lives in solitude. 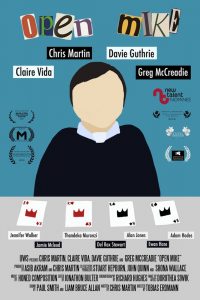 Mike is shy around people and adheres to strict daily routines. His regular visits to the local pub are his only form of companionship with the outside world. However, being in the wrong place at the wrong time soon sees Michael’s normal pattern of function disrupted.

Tobias Erdmann is a German filmmaker, who moved to Scotland in 2011 to attend university. In 2015, he finished his studies with a BA (Hons) – First Class in “Filmmaking and Screenwriting”.

During his time in university, he worked on several short films. In his final year he wrote and directed the buddy comedy short Little Green Bag, which received with The Final Cut award at the New Filmmakers Renfrewshire 2015 screening.

Furthermore, he directed the short Open Mike, which was nominated at the BAFTA Scotland New Talent Awards 2016 in two categories.

Since his graduation, he co-produced and co-directed Lucky Break (starring among others Sanjeev Kohli, Clare Grogan and Eileen McCallum), an educational-short, for the charity I Am Me Project Scotland that was funded by the Renfrewshire Council. The film is part of an anti-bullying campaign that will be shown in schools across Renfrewshire.