This is an LA West Side Story. 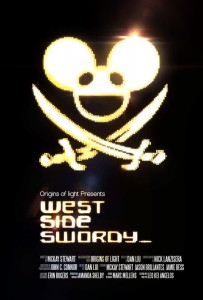 Written and Produced by: McKay Stewart

Every week the New Renaissance Film Festival selects a Film of the Week from all the received submissions. We post the TRAILER and a bio of the filmmaker on our website and social media to highlight their project. This week, congratulations goes to ‘WEST SIDE SWORDY’.

The Jets chase the Sharks through an alleyway and up over a tall fence, when suddenly they find themselves in another world, magically transported into an abandoned warehouse. Where they are controlled by the electronic beat of world-renowned disc jockey, Deamau5. This is an LA West Side Story.

McKay Stewart originally wanted to create a sword-fighting reel to try and help him and a few fellow stunt performers get jobs on the Pirates of the Caribbean movies. No joke! But then, he wanted it to be special, to have real production value, have a story. In essence, a short film.

“I started batting things around and out came this outrageous idea. Little did I know what this meant in terms of the production! I now had to hire a dance choreographer, professional dancers, rent out a huge warehouse somehow, light it somehow, shoot it somehow, on it went. I fortunately pulled in some phenomenal talent willing to donate their time to the project (Dan Liu, John T. Connor, Nate Fu and Nick Lanzisera) who made it possible.”

Dan Liu is an editor of AMC’s The Walking Dead, John T. Connor has shot features for the best in the business, including Ridley Scott, JJ Abrams and David Fincher; Nick Lanzisera has danced and choreographed on some of the hottest shows around, like True Blood, Footloose and High School Musical.

“We originally were set to wrap principal photography in the summer but we lost Nate Fu and most of the original cast, dancers included, to injuries and bigger projects. Disaster. But because of this I pulled in John T. Connor and the new cast was outstanding as well. John, in turn, brought an entire lighting, grip and electric crew to handle the task of lighting the gargantuan warehouse (where Inception was filmed).”

For more information visit the website: WEST SIDE SWORDY

Film of the Week stands apart from the Official Selection process into the New Renaissance Film Festival. However, from all the films of the week some will be chosen to be part of the festival, which will be held in London (UK) on
20th August 2016. A prize will be given to the overall winner.